Help Others Around the World!

The kids here are very clever.  They know the difference between a volunteer and a staff member.  Granted we do have different accents, but the respect level is completely different.  They will test and try every single volunteer, but wouldn’t dare try a staff member.  This effects doing the simplest task, such as going to the toilet.

They will kick, scream, hit, cuss and all sorts of things before simply going to the toilet.  Lately the older kids have influenced my group into saying cuss words.  I cannot say this word, because I do not know what it means and I cannot spell it.  It is extremely difficult trying to accomplish activities when three kids are crying, two kids are running around not listening, two kids are just staring and just four kids are actually trying to do the planned activity.

Now I know I am working with a difficult age group, anywhere between the ages of two and three and a half years old.  Most two to four year olds will not listen to anything someone tells them, but there are more factors that contribute here.  The difficulty lies between the language barrier (Afrikaans and English) and the large mental delays that many of these children face.  They spend the majority of their important developmental years in a place where they do not get the average parental contact, love, and discipline. Along with many other things effect the way the children act.  The staff

members do the best they can in order to give the children the correct discipline, love and everything that they need, but it is hard.  For example, one staff member in the morning is in charge of bathing, dressing and feeding 15 kids in about a two hours’ time.  Even for a super mom this would be hard.  The other obstacle is the mental delays.  Many of my kids act as though they are one and a half years old.   I’ve found out that one of my kids, Kyle, a 3-year-old boy that doesn’t talk.  He only says “no” and cries a lot.  His developmental struggles come from his mother drinking alcohol when she was pregnant.

These children have so many obstacles and barriers.   They must fight to get over their challenges and still find the ways to smile, laugh and play.  They do not know the battle in which lies ahead, but I know they will overcome them. Every day I hug each kid very tight.  I play with them while they sit on my lap and I think to myself; 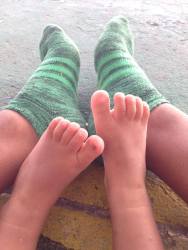 You can overcome anything,

You can do whatever you put your mind to”

If no one else believes in them, I know that I believe in them.  Each day I hug:  doctors, lawyers, teachers, pilots, nurses, soccer players, and astronauts. The road in front of them is not easy, but it is just one step closer to greatness for them.